Waxing Romantic is the debut album from Canadian artist Travis Bretzer. Hailing from Edmonton, Alberta, 24-year-old Bretzer has anappropriately singular, off-beat take on guitar pop. An adroit songwriter and true troubadour, Travis sidesteps easy pigeonholing. On his debut EP Making Love (Mexican Summer, 2013) he managed to touch on the new-pop of Orange Juice, the playful idiosyncrasies of Prefab Sprout, with a freewheeling sensibility present in much of the Stiff Records catalog. Above all, Making Love displayed some truly sophisticated songwriting that belied its occasionally haphazard bedroom production and casual delivery.

On Waxing Romantic, Travis has stepped up the production in a big way, graduating from the bedroom to a full studio environment. Recorded at Gary’s Electric in Brooklyn and produced by Jorge Elbrecht (of Ariel Pink’s Haunted Graffiti and Lansing-Dreiden fame) the new environment has allowed for Travis’ songs to be taken to new, fully-realized heights. The album also features a solid crew of players, including members of Haunted Graffiti, James Richardson of MGMT and Regal Degal’s Josh da Costa, who was key in shaping drum arrangements.

The move to the studio also feels very in keeping with the sonicinspiration Travis had for the album, which came in part from memories of rifling through his parents’ soft-rock LPs: think Gerry Rafferty, Al Stewart, Christopher Cross, The Eagles. With their warm drums andsmooth, clean studio sound informing Travis’ sonic palette, it makes sense that Gary’s Electric became the venue for the album recording.

As the title indicates, Waxing Romantic is thematically concerned with love. For Travis, the album reads like a storybook of the first couple of years of his current relationship, with each song acting like a totem for different events and moments. For this reason, the album is very personal – it navigates the giddy and elated feelings of falling in love, and the process of looking back and reflecting on it. In keeping with the album’s ’70s pop mode, the lyrics are kept simple and sweet, but never cloying. 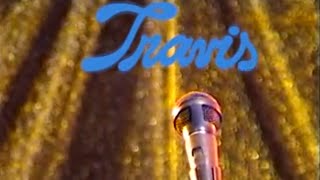