The Soft Pack are back with Strapped–an adventurous album that finds the Los Angeles-based foursome breaking with expectations and exploring the possibilities of how they can push their sound. In making it, the group took to heart a quote from the sage Pasadena thinker David Lee Roth that goes something like: “The first rule of rock & roll is if it sounds good, it is good.”

The Soft Pack’s history begins in 2007 when Matt Lamkin (guitar/lead vocals) and Matty McLoughlin (lead guitar) started a band in their native San Diego. They played house parties, dive bars, and anywhere that would have them. By the following year they’d added David Lantzman (bass) and Brian Hill (drums). The four of them soon moved up to L.A., put out some records, went on a bunch of tours, and coalesced into The Soft Pack. (As for the meaning behind their name, type it into your favorite search engine along with the words “transgender” and “FTM”…make sure you have the SafeSearch option off.)

Following the two and a half straight years of touring that came both before and after 2010’s self-titled release on Kemado Records, the band were burnt out but determined to take control of their future. They decided to self-produce their follow-up, which will be released by Kemado’s sister label Mexican Summer. During the previous sessions for their self-titled album with producer Eli Janney, they developed 12 songs and recorded all of them—10 of them made it to the album, the other two became B-sides. In contrast, while making Strapped they created 80 demo ideas, recorded 30 full songs, and then picked their 12 favorite ones for the album, no matter how far out they were.

The group also took their time while making Strapped, making it over the course of two years. This pace allowed them to integrate new ideas and approaches into their existing sound, not just outright cop them. The Soft Pack’s pop rock foundations are undeniably still present—nine of the songs don’t break three minutes and from the first seconds of glorious album opener “Saratoga” it’s obvious they haven’t abandoned the fuzz. That said, they’ve also spent a lot of time listening to Denim, Momus, The Church, YAZ, Grace Jones, INXS, Carole King, Lee Hazelwood, The Byrds, and Elton John. “Bobby Brown” is an icy new wave number, whose saxophone solo is just one of several horn appearances on Strapped. For “Head on Ice,” they layer on the dark atmospherics and capture a spiraling sense of doom. Maybe the most surprising cut on Strapped is album ender “Captain Ace,” a jubilant space cruiser that jams out to nearly the seven-minute mark. Enjoy the ride. 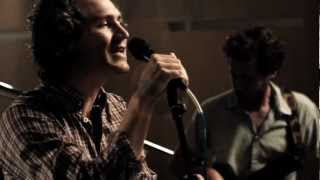