Following their hugely critically acclaimed album Lucifer, LA duo Aaron Coyes and Indra Dunis, AKA Peaking Lights have announced the imminent release of Lucifer In Dub – a special collection of dub edits conjured up by Coyes himself.

The Sonic Boom-mastered, six song collection takes the glistening strands of krautrock, minimal house, analogue dance music, skewed pop and the band’s core influence – dub – which Lucifer so successfully fused together and pushes even more deeply into the murky heat of the latter. The result is a seductively heavy surrealist-soundsystem monster that acts as a perfect companion piece to the hypnotic groove and intricately patterned melodies of its parent record.

“Before Lucifer even had a song written or a name to it we had the ‘light bulb skull rattle’ that we had to do a dub for whatever was to come out of the studio session at Gary’s Electric”, says Coyes on the album’s genesis. “After spending the better half of the year on tour we managed to finally settle in to a spot in Echo Park where we set up a small studio and got physical with dubbing out the Lucifer LP. We have always loved the challenge of approaching the music we make from a new angle, and although the dub aspect to the music we make may be there in structure this is the first time we have layed it down by playing as the engineers.”

“Both of us really love how Lucifer in Dub turned out. We wanted it to have a different feel with the mastering; Shawn Reed of Night-People who put out our early recordings introduced us to Sonic Boom who we met while on tour and later worked with mastering some of our remixes. He really understood the sound we were after, there was no compromise in the low end, he gets our zone – warm, lush, round, heavy on the psychedelics.” 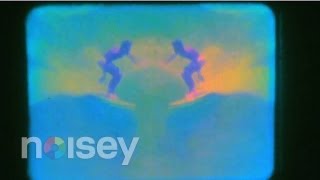