A master of romantic abstraction, Jefre Cantu–Ledesma is not new to the scene. In fact, he’s been releasing a steady stream of music for nearly twenty years. With the brilliant album A Year With 13 Moons, however, the ever–prolific Ledesma appears to be hitting a new high. Or low, depending on how you like to see things. More on that later. First, some background.

Born & raised in Texas, Ledesma’s formative artistic years were spent studying painting & sculpture in San Francisco. He began playing & releasing music in 1996 and has developed a steady relationship as a collaborator – he’s released notable collaborations with Liz Harris (aka Grouper) as Raum, with Alexis Georgopoulos in his Arp project and with their ensemble The Alps, as well as filmmaker P. Clipson. Ledesma also founded the influential label, Root Strata, who have released music by Oneohtrix Point Never, Keith Fullerton Whitman, and Grouper, and continue to release new and archival works.

Though its title is borrowed from Fassbinder, the influence of other filmmakers – among them, Alain Resnais, Chantal Akerman and Chris Marker – played notable roles during the making of the album. Cantu explains. “Their use of personal and collective memory as a narrative was a big influence on the editing of the LP, and Marker in particular showed me that seemingly desperate elements (i.e. pop-like structures and melodies vs noise) can cohesively form a whole.”

Cantu was interested in ways of “conveying memory in music without being sentimental – somehow translating the fog of images, people and places that (he’d) experienced in the last two years into a body of work that could still be ambiguous & leave space for the listener to enter.” As such, 13 Moons succeeds. Incisive editing allows hypnotic guitar and drum performances to be interrupted by Modular synth squalls and otherworldly textures –– combining overdriven guitars, avant-garde composition (a la Xenakis) with the informal approach of underground tape weirdos (like Robert Turman, K. Leimer) into a lovely brocade of harmony and dissonance.

Tracks like “Shadows”, “Early Autumn” and “The Isar” bring these avant gardisms to the fore, conjuring early experiments in industrial sound. “A portrait of you at Nico’s grave, Grunewald, Berlin (For B.K.)” might represent the album’s loneliest moment, the air moving in hovering cloud formations. It would be perfect to soundtrack a Werner Herzog film. “Body of Moonlight” allows hope, a disappearing presence in the latter stages of 13 Moons, to resurface. It’s a feeling Ledesma is very good at. That sense of something very intense at hand, and that fracturing sense of looking down at yourself. It’s a feeling nearly impossible to describe. Then again, if words can’t convey something, sometimes sound is better.

Currently resided in Brooklyn, Ledesma s currently working on new Raum material with Harris and with Georgopoulos on a new, as yet unnamed duo. 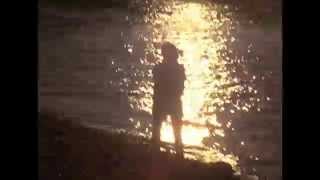