Dungen’s Häxan narrative evolves and expands with a limited double vinyl edition of the 2016 album. Fashioned with all new artwork interpreted from sanctioned stills of Lotte Reiniger’s 1926 animated masterpiece The Adventures of Achmed and a bonus 12” EP of live material from Häxan, the collector’s edition accompanies a string of live film score performances by Dungen taking place at prestigious US venues this March.

In addition to a silk-screened jacket and second vinyl piece, the new edition features a booklet with extensive writing about Reiniger’s film and Dungen’s Häxan score by Gabriele Caroti (director emeritus of BAMcinématek), Anders Annikas (programmer at the Cinematheque at the Swedish Film Institute), and band members Reine Fiske and Mattias Gustavvson. This deluxe limited edition of 500 will only be available at Dungen’s spring 2017 shows and direct from Mexican Summer’s online store, The Outpost.

In between the release of Dungen’s most recent two albums (2010’s Skit I Allt and 2015’s Allas Sak), the beloved Stockholm quartet was asked to create an original score to Lotte Reiniger’s 1926 touchstone The Adventures of Prince Achmed, understood to be the oldest surviving full-length animated feature film. Inspired by the nature of the work and the characters portrayed within, the members of Dungen collaborated on themes to represent their take on the film’s narrative, and immersed themselves in the groundbreaking visual language of this landmark film.

Häxan (translation: “The Witch”) is the result of those works, Dungen’s first all-instrumental album, and a continuation of all the things we love about their music. Moody, evocative, stormy, and brimming with life, Häxan provides both a tacit summation of the Dungen journey up to today, and gives the beloved group a chance to stretch out like never before. Here, the psychedelic rock is more bombastic, the softer passages more exquisite, the tension in their musical interplay more dramatic, their intentions remarkably robust. Häxan allows Dungen to move deftly between styles in a more circuitous fashion than their previous works, allowing them to build a story of their own around the action and characters in the film – Prince Achmed, Peri Banu, Aladdin, the Sorcerer, and most of all, the Witch – that reaches beyond the source material, returning to the hooks and melodies that come earlier in the album.

More pronounced collaboration with Häxan’s producer, Mattias Glavå, set the tenor of the sessions, fostered the interstitial moments between tracks, providing a more seamless listening experience. Recorded, mixed, and edited by hand to tape entirely in the analog domain, Häxan was sequenced away from the linear narrative of the film. This process helped to create a path of its own, fully capturing the rawness and spontaneity present in the sessions, as well as a loose, abstract, and fragmented collage feel, evident in the dense and dissonant free-form rock-outs, haunting ambient passages, and gorgeously cinematic soundscapes present in the work. As a result, Häxan works as new, original music by Dungen, both with and without the presence of the film itself.

With Häxan, the indulgences taken by Dungen find new corners in their creative space. “Trollkarlen och fågeldräkten” approaches the excitement of early ‘60s post-bop in a way that the band has yet to reveal until now, with Gustav Ejstes’ attentive piano melody connecting to Mattias Gustavsson’s bass, as Reine Fiske stretches out atmospheric strains of feedback-laced guitar overtop, while drummer Johan Holmegard establishes a busy, polyrhythmic background with a light touch, almost exclusively focused on cowbell and cymbals. The breezy, groovy theme to Aladdin’s appearances is cut across a handful of Häxan’s runtime, extended to both compact, flute-led bursts of melody, and a more luxuriant synth-based variant. Ejstes applies church organ sternness and harmonic majesty to “Kalifen,” which melts from a stately, Procol Harum-esque introduction into ‘70s soul stabs across a coolly understated rhythmic backing. Elsewhere, “Andarnas Krig,” “Wak-Wak’s portar,” and the title track represent some of the heaviest music Dungen has made to date, recalling the similarly burnt-edged Middle Eastern themes that Agitation Free cut for Vertigo decades ago. “Achmed flyger” ties it all together, with Ejstes and Fiske performing dual piano and synth leads, as the drums and bass surge underneath, creating a driving and focused backing, just as the film’s action begins to take flight.

Most recently, Dungen performed Häxan alongside the film at Mexican Summer’s 2016 Marfa Myths festival, marking its American debut performance. Asked about the experience overall, Gustav says, “In this setting, the movie becomes a solo instrument of its own, and we are simply backing up what we see on the screen. In many ways, it was a liberation to share the focal point with an audience when you’re performing with this kind of accompaniment. It’s a refreshing change to be playing live, and not be the center of attention; it’s the movie instead.” 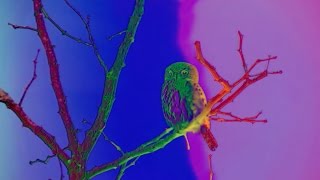