Those two Swedish words translate loosely into English as “everyone’s thing” or maybe “anyone’s thing.” They not only provide the title for Dungen’s latest collection of sophisticated psychedelic rock, but explains how the band works creatively and collaboratively.

“I was told by a friend once that as a songwriter and as a musical artist, you have to understand that as soon as the music leaves your body, it is no longer strictly yours,” explains Gustav Ejstes, Dungen’s mastermind and main songwriter. “The listener also owns it and filters it through their personality, their thoughts and feelings.”

In other words, the music is everyone’s thing. It belongs to the band and to whoever hears it, which means that everyone is empowered to decipher the Swedish-language lyrics for themselves, to locate their own stories in the magisterial instrumental jams, to make all of this mean whatever they need it to mean. For Dungen, this communion between artist and audience is a beautiful and necessary process that makes the music mean more, not less. It becomes, in a sense, infinite. “These songs are my everyday experiences, my thoughts and stories from the life I live,” says Ejstes. “I hope people can create their own stories around the music and maybe we can make music together, the listener and I.”

Ejstes has been making music—at first for himself, then eventually and inevitably for all of us—for nearly twenty years. Growing up in rural Sweden, he became obsessed with hip-hop and sampling. Digging through crates and searching for obscure source material provided him with an informal education in ‘60s pop and psychedelia, and soon he learned to play the bits and pieces he was sampling. He took up guitar and bass, drums and keyboard and even flute, then took to his grandmother’s basement to put it all on tape.

When Ejstes recorded his first album, he released it in 2001 under the name Dungen, which means “The Grove”— a nod to his village upbringing or perhaps a deeper reference to American folk songs like “Shady Grove.” While his music has routinely garnered comparisons to acts like Love, Pink Floyd, the Electric Prunes, and Os Mutantes, he has always emphasized a strong sense of songcraft. The music has deep roots in history, but it blooms in the present.

With 2004’s breakout Ta Det Lugnt Dungen garnered an avid fanbase outside of Scandinavia. Pitchfork lauded the album with a 9.3 and asserted that Ejstes’s “songs are painstakingly arranged with a sense of depth, gradations, and tonal three-dimensionality redolent of something as off the charts as Pet Sounds.” Only on the road did Dungen blossom into a full band, with a rotation of musicians joining Ejstes onstage and eventually coalescing into a fully democratic band that includes Reine Fiske on guitar, Mattias Gustavsson on bass, and Johan Holmegard on drums. Starting with 2007’s Tio Bitar and 2009’s 4, the band members helped Ejstes realize his own vision while adding flourishes of their own. As a result, Dungen grew into something bigger and more formidable: one of the best and most consistently inventive psych rock bands in the world.

At the height of their powers, however, the band took a step back.

It’s been five years since the last Dungen album, 2010’s Skit I Allt, which is by far the longest interval between releases for a band that proved especially prolific and inspired during the 2000s. “We have all been away during this period for different reasons, playing music in different projects,” says Ejstes. “I have been writing songs in the meantime, so the actual recording process has been pretty short.” During the interim, several members of the band released albums as the Amazing, including 2012’s Gentle Stream and 2015’s Picture You. Ejstes himself co-founded the Swedish supergroup Amason, which includes members of Idiot Wind, Little Majorette, and Miike Snow. They released their debut, Sky City, earlier this year.

Allas Sak picks up where Dungen’s previous album left off, but somehow it sounds bolder and livelier, feistier yet more focused. The four of them jam with greater purpose and principle on songs like the otherworldly instrumental “Franks Kaktus” and the stately “En Gång Om Året,” while the prismatic “Flickor Och Pojkar” and closer “Sova” reveal subtle nuances in the band’s arrangements. Listening becomes an especially galvanizing experience, heady and enlightening. If psychedelic music has often been associated with drug use, for Dungen music itself is the drug: the most effective vehicle for transcendence.

The band brought in “a good friend of ours” named Mattias Glavå to produce the record. In addition to helming records for the Soundtrack of Our Lives, Sambassadeur, and the Amazing, Glavå worked with Dungen on 2005’s Stadsvandringar, which made these sessions a reunion of sorts. “Mattias is a true wizard of analog sound engineering, but he’s more than a technique nerd,” says Ejstes. “He’s the ultimate hand between my vision of a sound and reality.”

Glavå suggested the band work out songs before they entered the studio, rather than writing during the sessions. It was a different way of working, but one that Ejstes found invigorating. “He suggested we come to his studio with finished songs, and we did live takes directly to tape—the old-school way. It has truly been a quite different experience from the earlier records.”

Allas Sak is about everyday matters: family, friends, the fine texture of life. Common but never mundane, these subjects anchor the music in the here and now, while the music lends a certain grandeur to ordinary moments. “Lyrics are very important to me,” says Ejstes. “We know a lot of people who don’t speak Swedish who love the music anyway. Music comes first every time. I think it could be wordless if the moods in the music take you somewhere, but often the melodies are attached to words that came up the first time they were played.”

Again, it comes back to the listener. Even as the band continues to grow, the listener remains a constant collaborator, not only inspiring new songs but rejuvenating old ones. “I can definitely feel a new significance in some of our older songs, mainly because of the people we’ve met and the stories about their own experiences with the music.” 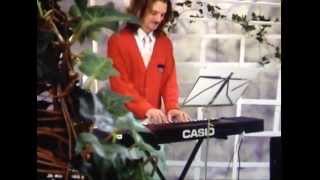